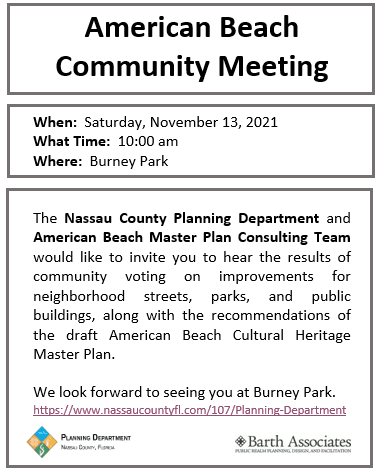 Planning Staff and the American Beach Cultural Heritage Master Plan Consulting team joined more than 70 residents on Saturday, 8/14/21 at the American Beach Community Center; for a presentation and discussion of future improvements to the streets, sidewalks, public lands, and natural environment of American Beach. Residents provided extensive input on future improvements and everyone enjoyed a delicious BBQ lunch from Captain Jack's BBQ, courtesy of project manager Dr. David Barth. The presentation is below.

American Beach is listed on the National Register of Historic Places.

Starting in 2018, Nassau County PEO staff have been working with the American Beach community to help preserve the unique character of the community.

American Beach, located on the south end of Amelia Island in Nassau County, Florida, has the distinction of being one of the few remaining beach resort communities in the nation developed specifically by and for African-Americans. Developed by the Afro-American Life Insurance Company in 1935, American Beach was until the passage of the 1964 Civil Rights Act one of the few beaches in the Southeast available to African-Americans. Even with the increased availability of beach resort opportunities for African-Americans, American Beach continued to survive during the 1960’s and 70’s as a distinctive beach community composed predominately of single family beach cottages. (Source: Historic Building Survey of American Beach, 1998)

During their 2/17/2021 meeting the Board of County Commissioners approved funding for the American Beach Heritage Master Plan (name subject to change). The Plan has the following components:

The County has retained a talented team of consultants for this effort including Dr. David Barth, a nationally known parks planner, Ennis Davis, planner and creator of the Jaxon, and Carlos Perez, an Atlanta-based urban designer.  The kick-off for this effort will be held on April 10, 2021 at the big tent in Burney Park, at 9 AM. We look forward to seeing everyone there!

Planning staff is working with members of the community, as well as the County Facilities Department, on future 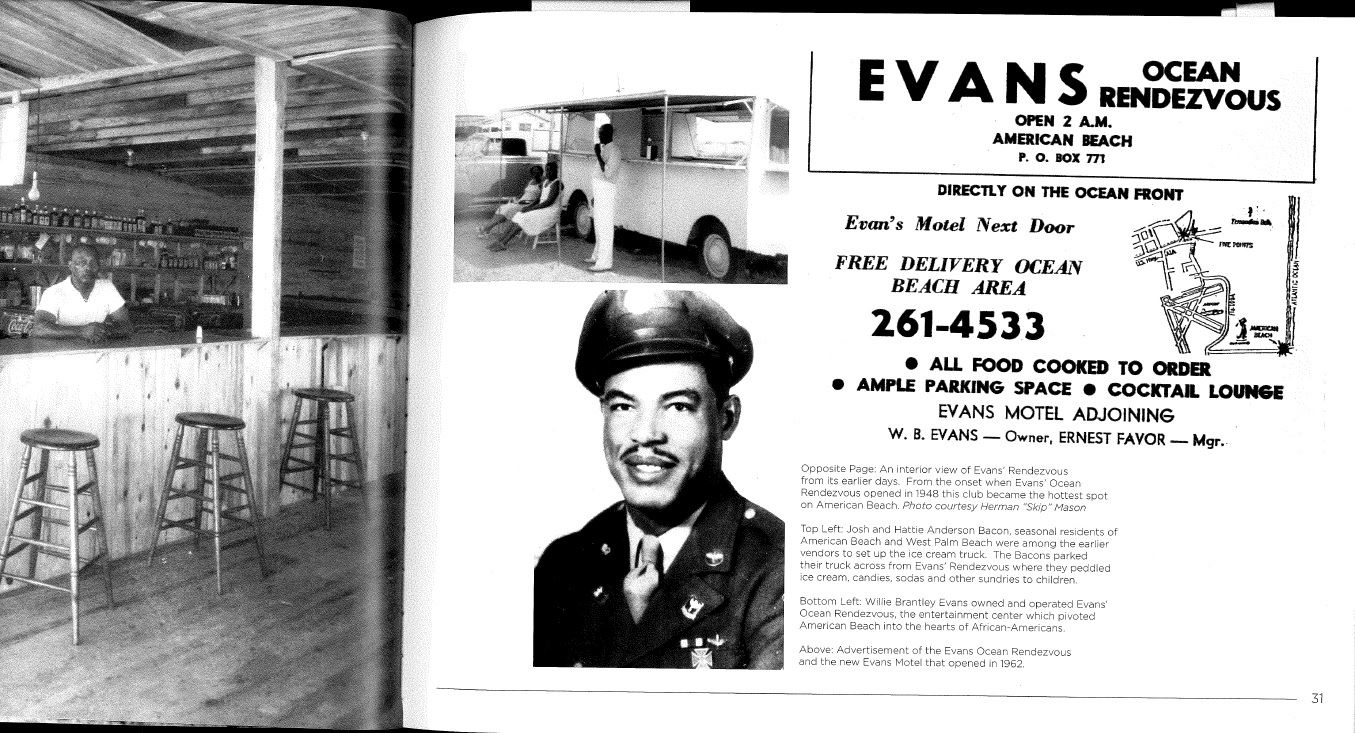 revitalization plans for the Evans Rendezvous.

American Beach became popular with Jacksonville-area residents, but thousands of people from across the Southeast and country visited American Beach. Notable visitors included Mary McLeod Bethune, Cab Calloway, James Brown, Ray Charles, and Zora Neale Hurston. As the community grew, it included homes, rental cabins, small motels, and affiliated commercial sites. One of the most popular and enduring commercial buildings was the Evans Rendezvous, an oceanfront restaurant, bar, and entertainment venue. Says Marsha Dean Phelts, author of The American Beach Book of Homes, “To say Evans' Rendezvous was the most frequented spot on American Beach understates its popularity and impact on this resort community.” Remembered by visitors as the "heartbeat and synergy" of the community, the Evans’ was a 200-seat establishment, serving food and drinks and home to musical entertainment and dancing. Started in 1948 by Willie Evans, Sr., the Rendezvous operated continuously until 2000, when it closed.

In 2004, with assistance from the Trust for Public Land and the Florida Communities Trust, Nassau County obtained ownership of the Rendezvous site for purposes of creating an American Beach Historical Park. Since 2004, initial restoration work has been completed on the structure. After this initial rehabilitation work was completed, no further plans were put in place to continue the project.

A management plan for the property was executed in 2005 that restricts the uses of the site. Specifically, the plan requires continued public access to the beach, protection of the beach dunes, use of Evans for public interpretation, recreation and social event uses, focus on preservation and interpretation of the American Beach National Historic District, and restoration of native vegetation. 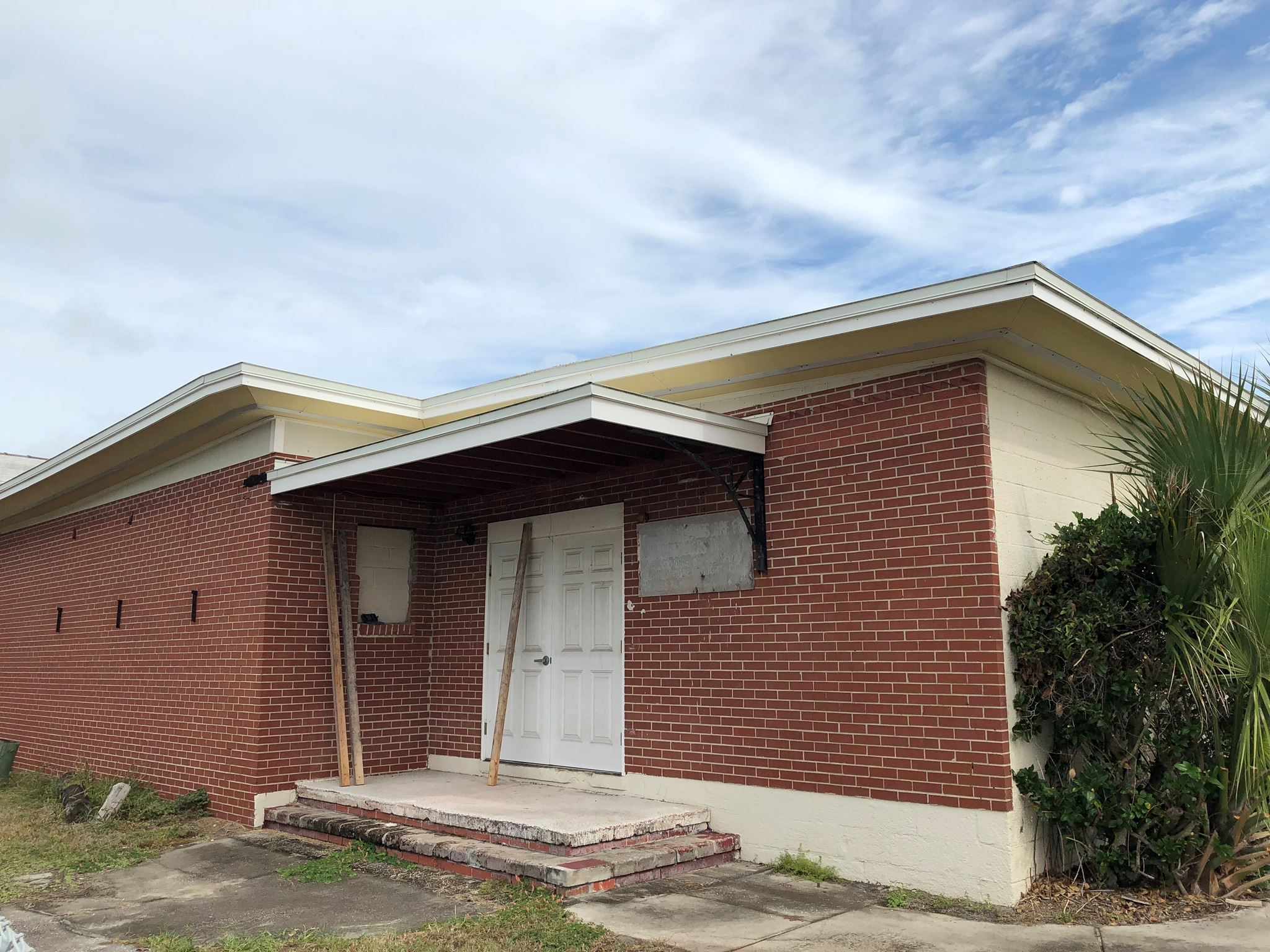 In 2018, County staff formed an Evans Rendezvous Task Force with staff from the Planning and Economic Opportunity Department and the County’s Facilities Director, and several members of the American Beach community, including representatives of the American Beach Property Owners’ Association (ABPOA), Friends of American Beach (FOAB), and the adjacent property owner. The Task Force has met several times to determine a process for continuing progress and moving forward to see the Evans’ brought back to life. The Task Force determined that because the management plan outlines the future use of the structure, the next best step was to proceed with architectural and engineering construction documents.